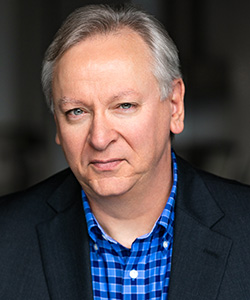 Gregory Van Sudmeier is a veteran composer, CLIO Award-winning music producer, music director, arranger, symphonic/choral director, and educator. He is the Music Director-Conductor for the Diablo Ballet in Walnut Creek, CA and he has also been the Music Director-Conductor for the Fremont Symphony Orchestra, CA from 2012 through the 2015 season. He is based in Atlanta, Georgia.

As guest conductor, Sudmeier has led the Oakland and San Jose Symphonies, and was touring conductor for the San Francisco Festival Pops. For twelve seasons he served as Music Director/Conductor for Peninsula Civic Light Opera in San Mateo, for five seasons he led the Burlingame String Chamber Orchestra, and since 2005 has been Resident Musical Director of Hillbarn Theatre in Foster City. For a combined 17 years, Greg also led various Choral programs in churches around the San Francisco Bay Area, conducting Major classical choral/orchestral concerts and also leading in the Contemporary/Gospel/Inspirational idioms.

As one of the founders of the Skywalker Symphony at LucasFilm in Marin County, CA, Greg has contracted and performed in many film and recording projects, including the Grammy nominated StarWars Trilogy with composer John Williams, and artists such as Linda Ronstadt, Randy Newman, Jimmy Webb, the band Journey, Aaron Neville, and composers Jeff Beal, Alan Sylvestri, Lawrence Rosenthal, Bill Ross, Christopher Young, among many others. He has vast experience working on sessions for feature films and albums, while coordinating the finest recording musicians in all styles and idioms.

““I am committed to providing the best possible musical product. I’m here to help. Whatever your needs or musical style – audiobook, podcast, custom demo, choral project, music for stage, television theme, jingle, major release album, or music for a feature film, I can help make your project a success!”
– Greg Sudmeier

A Northern California native, Sudmeier attended Eastman School of Music in Rochester, New York, where he received the Duke Ellington Scholarship for writing and arranging. He has served on the faculty of music programs at the University of Hilo, Hawaii, University of the Pacific, California State University East Bay, and Notre Dame de Namur University in Belmont, CA.